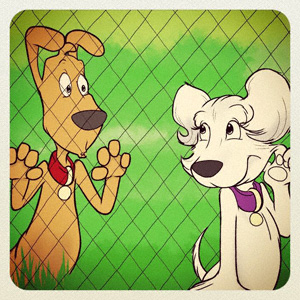 Her Majesty from next door came home the other day with a new coiffeur. She trotted over to our adjoining fence with her head held high to have a chat with me and show me her freshly laundered and clippered locks.

I could scarcely believe it was her. Aphrodite is a white highland terrior and with a full coat on, she is a shaggy mongrel of a beast with a healthy beard and eyebrows that nearly obliterate her eyes. Her eyesight isn’t that great to begin with (she’s been known to lunge in full battle cry at the neighbour’s shrubs and toys on her walks), and her hearing is also very questionable. I’m sure her usual state of being a walking mop does little to enhance her senses. 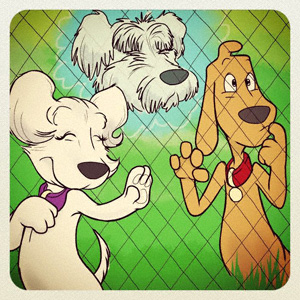 However, my humans’ grandparents chose to keep her coat long over the winter, I’m sure with the kindest intentions. Now that spring and the torridity of the season has arrived, they decided that the most philanthropic thing they could do was rid her of her excess pelage to make her more comfortable for the summer months.

She honestly doesn’t look like the same crotchety neighbour I had just yesterday. She has a sleek, very short coat now. Her face, instead of being round is now elongated. Her ears have a perky, but feminine look. Her eyes look clear and bright and we might even say... sparkly. Her ensuing attitude after leaving the groomers had a serendipitous result. She feels pretty. 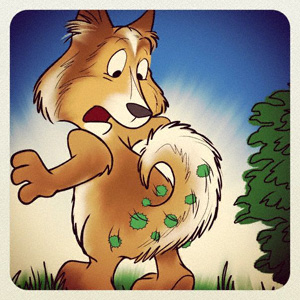 It is an interesting contrast to my neighbour Randy to the north, a sheltie-pom cross with lassie-looking face and a beautiful tawny pellicle. His tail is a magnificent plume, like a fountain rising up above his posterior and cascading back down over the sides, with lovely flowing feathers of fur from his haunches.  He is indeed a handsome beast for his diminutive size.

I recall an occasion when he had inadvertently stumbled across a growth of burdock in the back alley. Try as they might, his humans could not get the tenacious velcro-like burrs out of that glorious empennage. So they did what they had to do - They hacked his fur down to the skin. 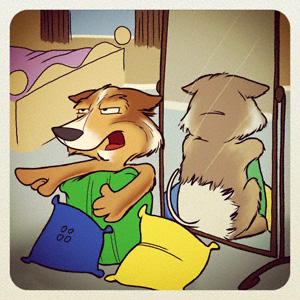 Poor Randy was mortified. He could  no longer show his backside in public. The embarrassment of his bare bottom was more than he could stand. He refused to go on walks and would not allow anyone to look upon his naked posterior. He would sit firmly down on that thin peeled rat-tail and shuffle his body around so that no one could see his what was left of his former glory.  He was a miserable shell of his former self. 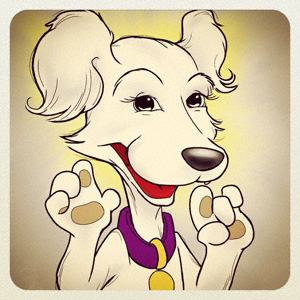 It occurs to me that one’s confidence and self-esteem all boils down to perception. If you think you look good, you feel good. Randy’s pride and joy grew back after a few long months and he was once again able to hold his tail up high. Aphrodite’s scruffy look will also return by fall, as will I suspect, her cantankerous disposition.

But for this moment, she believes herself to be beautiful, and it’s not hard to get caught up in her delight. I think I believe it too.