Year Of The Snake & Lucky Money 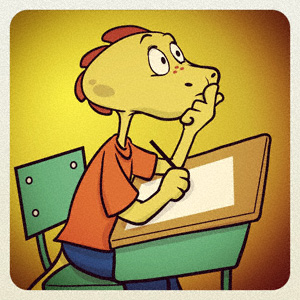 We've been studying about Chinese New Year in school.

Chinese New Year is at a different time than when our New Year is. In China, it is called the Spring Festival because it marks the end of winter in the lunar calendar. The actual date of the Chinese New Year changes each year, but always falls between January 21st and February 20th.  It is the largest celebration for the Chinese people and is celebrated for 2 weeks. This year the start of the Spring Festival falls on February 10th.

There are lots of celebrations around the world for Chinese New Year. In our city, there is a big parade every year.

There is also a special zodiac with 12 different animals for Chinese years. For example, we are just closing the Year of the Dragon and coming in to the year of the Snake.

People who are born to a specific animal are supposed to have their traits. People born in the year of the snake are supposed to be very private people and also very intelligent and wise. 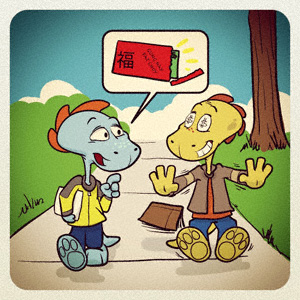 Anyway, I just found out something pretty exciting. My friend Bin just told us that at Chinese New Year, all  the children in his culture get lucky money in red envelopes from their relatives!

Apparently, this is really common for Spring Festival, the same way that we get Christmas presents. Anyway, the envelope is an important part of the tradition. Relatives fill them with money and present them to all the children in their family. Bin says that amounts of money are also very important in the Chinese culture. 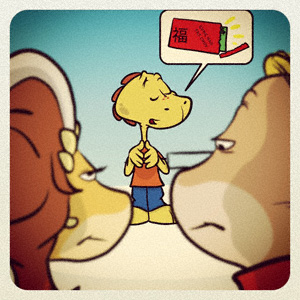 Lucky money is usually given in amounts ending in even numbers except for  the number 4 which is considered unlucky because it sounds like the word death. But the number 8 is really lucky. The reason the envelopes are red is because red also symbolizes good luck.

I think it's important to embrace new customs, so I've found some patterns that anyone can print off and make their own lucky money envelopes. Maybe I can encourage my relatives to adopt this great tradition in our family!

Click on either of the print buttons below to print your own lucky money envelope!