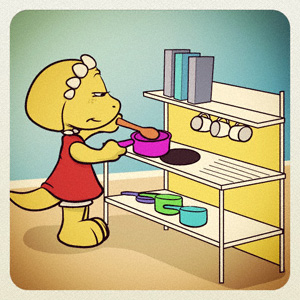 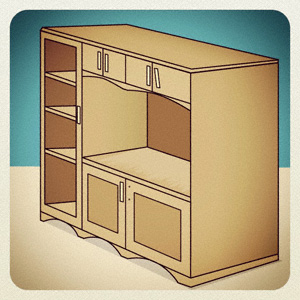 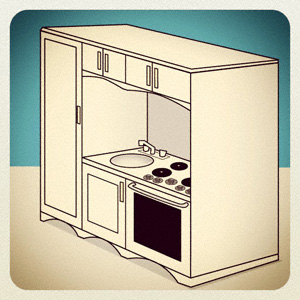 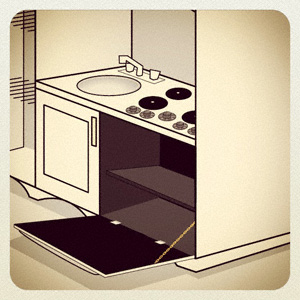 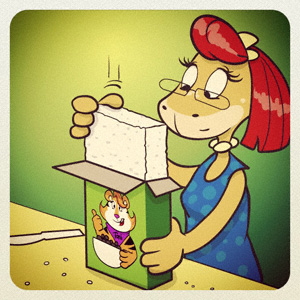 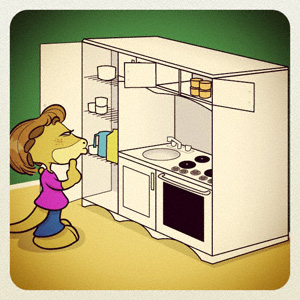 Last year I built Boo Bear a cute little play kitchen out of scrap wood and other recycled items I could find and it turned out pretty good. At least BooBear seemed to think so and she still occasionally plays with it when her cousins come over.

But my nephew Brian went a step further when he repurposed an old entertainment unit that was starting to look beat and had some broken pieces that needed some fixing that would have been hard to hide. He turned it into a play kitchen for his kids and moved it into the playroom of their basement.

Brian is a handy kind of guy anyway and is always building on something, but I was really proud of him for his ingenuity. To make the oven, he painted the inside of the cupboard black and used the natural trim on the existing door to be the framework for his oven window, which was just the wood painted black. He turned the hinges to the bottom of the door so that it would open like a real oven and attached a thin chain to the one side so that it wouldn’t open too far. For the oven door handle he used an old small towel rack.

For the burners, he painted some old scratched CD’s black and just screwed them to the top. To make the burner and oven knobs, he cut out round disks from a plastic milk jug, painted them black and then put little white lines on them to to show the degrees of heat and glued them down. Then he painted 4 regular plastic bottle caps black and used a one from a wider mouthed bottle for the oven. He painted one white line on the side of each. Then he put a bolt through the bottle caps with a nut on the bottom (inside the oven) so that the knobs would turn and you could turn the stove off and on.

To make the sink my niece gave up one of her mixing bowls and Brian just cut a hole in the cupboard for it to sit down in. When he needed taps, he came to see me. I had an old small set of bathroom taps that I had salvaged and was happy to donate to the cause.

He turned the one tall cupboard of the wall unit into a refrigerator by taking out the old glass and putting in a piece of plywood instead.  I think he probably bought the wire shelves that he installed on the inside of the door, and he’s still looking for something that can be used as crispers.

My niece has been saving all sorts of small paper boxes of products ever since Brian started on the project. She put out the call earlier for any styrofoam packing materials that people happened to get appliances or other things in, and then she cut those up into exact blocks to fit into each empty box to make them more sturdy. Then she glued the packages closed again. I suggested she could also make the “food” more durable by giving the boxes a coat of shellac.

She also put the call out for small individual plastic containers, like yogurt that she could refurbish for the refrigerator. Once people got wind of what she was looking for, she had a whole assortment of goods to stock the cupboards with!