Solar Road To The Future

Yesterday I was surfing the internet using two of my favorite key words: “solar” and “power” when I came across one of the best ideas I have ever seen!  What if our asphalt roads and parking lots were always dry, safe, well-lit AND smart....all while producing and storing enough solar energy to power the whole world! 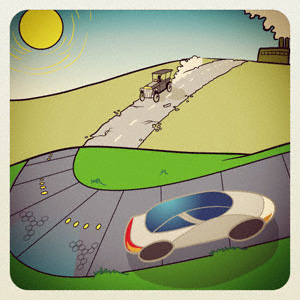 This great idea is so simple that I can’t believe I never thought of it.  Right now they have already built a prototype that really works so we know that its totally do-able.  I wish everybody would hear about this because it is a perfect solution to hundreds of problems that we know are harming our planet.  They say price of oil is always going up and we may not be able to afford to use asphalt for our roads in 50 years.  What they want to do is little by little replace all of our roads with these easy to replace square sections of solar road panels.

These panels would be made out of garbage that they pull out of the oceans and landfills to make a strong road with good traction.  The best part is that these sections are loaded with little round solar panels solar energy collectors and LED lights.  They also put weight sensors underneath the panels and you can imagine all the things this road does!!!! 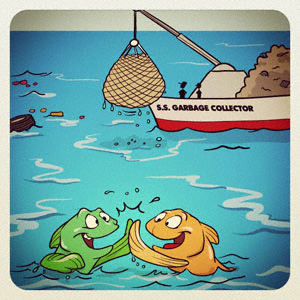 The lanes can be painted with LED’s and those lights can warn drivers about people crossing the street ahead by lighting up a message on the road for drivers to see.  Same with deer and moose and other animals that are always on our highways.  They can also put heating elements like the ones in the back windows of our cars that will keep the roads dry when it rains and Dad explained how that will keep the animals off the roads anyways cause they they like to hang out on the road and lick the salt that we use to melt the ice.  When I showed Dad, he also thought it was a great idea and he got really excited about how much money our government could make by selling the energy that the roads produced. He says that way those roads would easily be able to pay for themselves over their lifetime. 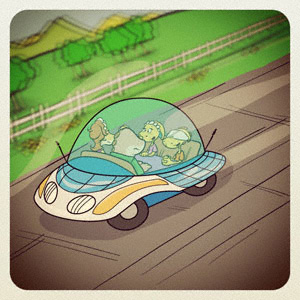 I have always wondered why we North Americans who have all the advantages haven’t got the most advanced technology in the world.  We should have smart highways that produce enough energy for everyone and power our electric vehicles. Our cars should be driving themselves with sensors in the roads that control everything and cut the human error factor out of driving.  We could get rid of all the power lines that block the view of the countryside.  Everybody who was near the road would have access to renewable energy.  We could put cable TV, internet, telephone and everything in there. We already have all the tech, if we all just decided to do this we could make something that would really change the world!