Snowflakes Made From Plastic 6 Pack Rings

Someone shared some terrible pictures on facebook of animals that have been caught in those awful plastic six pack rings that drinks in aluminum cans are sold with.

This was right after the news reported that they had found the body of duck that had one tangled around its neck and beak. People had been trying to catch it to cut the plastic off but couldn't. It took about a month for the duck to finally starve to death. 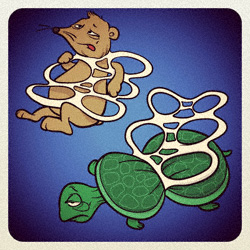 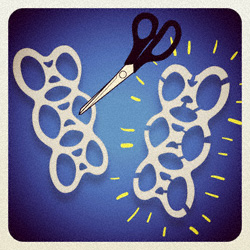 I can't tell you how furious it makes me to see animals suffering because of us human's carelessness! When these plastic rings go into the garbage or ocean, wildlife can get themselves stuck in them. The rings are so strong, that they will last for years around an animal and will even keep it from growing or eating properly. I call these six pack rings "Strangulators".

Every time I see one in the garbage, I take it out and cut all the rings apart so there is nothing left for a bird or fish to get its head into. If everyone would do that, not one more animal would have to suffer ever again!

There is something positive you can do with strangulators instead of throwing them away where wildlife can get at them.. You can actually make them into a beautiful snowflake to hang as a decoration. Somehow, I don't hate them nearly as much once they've been turned into something useful and pretty. 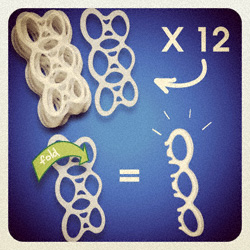 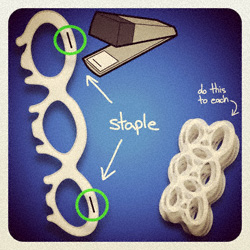 You need about 12 or 13 strangulators.

Fold each strangulators in half lengthwise.

Staple the top and bottom rings together on the edges opposite your fold. Do this to each of your strangulators. 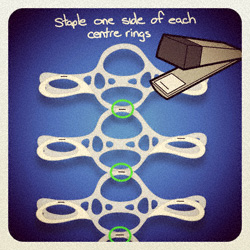 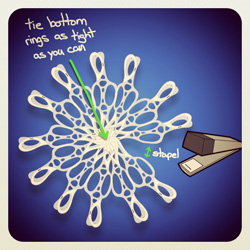 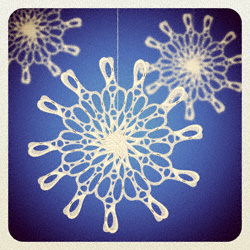 Now take a white zip lock strap or some fishing line and thread it through all the bottom rings of the strangulators, and zip them (or tie them) as tightly as you can together.

Staple the final two centre rings together to close the circle and complete the snowflake.