Once of the charms about the TV show MacGyver was that he could take almost any problem and manufacture a fix from whatever happened to be handy. The thing is, quite often you CAN fix things with a something else you have on hand. Sometimes it takes a little modifying, but often you can effect a temporary-to-permanent fix that works just as well as the original. 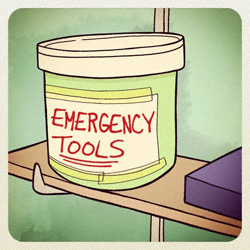 There are a few things every house should have in their emergency tool can at all times:

A hammer, a multi-bit screwdriver, a pair of pliers, a set of precision screwdrivers, a tape measure, a small electric drill, a small flashlight, a roll of duct tape and a roll of clear packing tape. (a pair of needle nose pliers and wire cutters are often very handy as well.) You should also have a small assortment of nails and screws, nuts and bolts. We use an old dishwasher soap bucket which holds all our stuff quite nicely, and sits on the shelf ready to reach for any time we need it. Of course, I have a fully equipped shop for bigger jobs, but often all we need it that emergency tool can. 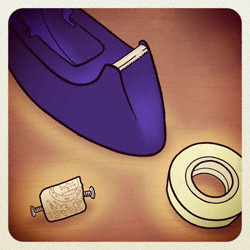 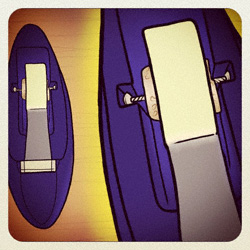 For example, when one of the arms from the little plastic roller from our scotch tape dispenser  broke, I discovered that a cork was the right size to go into a roll of tape. All I did was cut it to fit into the dispenser, and then put a screw into the middle of each end so that they would slide into the slots. That fix has worked for years. 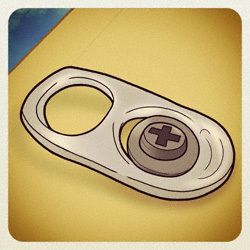 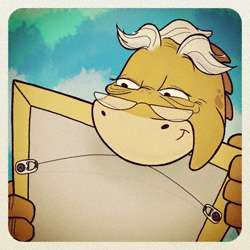 When My Sweetheart needed some picture hangers, I asked the kids for a couple of the pop can tabs they’ve been saving. All you do is use a small screw to attach the bottom part of the tab to whatever you need to hang. If you want a string type hanger, you put a pop can tab on each side of the frame and attach your string to the tabs, or you can on the wall directly from the tabs. 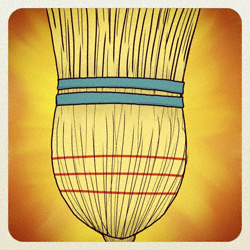 I like to use a corn broom for cleaning up the sidewalks, but after a while the bristles get splayed and not as stiff, especially if they’ve gotten wet. My Sweetheart saves the wide rubber bands she gets from vegetables and a couple of them around the bristles makes the broom like new again. 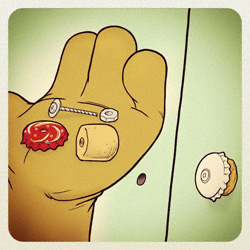 When we had a knob came off a cupboard door, I remembered that I used bottle caps to make knobs for the doors a set of play kitchen cupboards from cardboard boxes. BooBear and I have been saving all sorts of bottle caps, so I found one that was sturdy, cut a piece of cork the right depth the fit into it just to give it some backing and then drilled a hole through the cork and the bottle cap. Then I just put a bolt with the head at  the top of the bottle cap and through it and the hole in the drawer with a nut on the other side of the drawer to hold it tight.  Just so it matched the cupboards and didn’t look like a bottle cap, I gave it a bit of paint. I keep meaning to pick up a real knob at the hardware store, but that bottle cap is working so darned well! 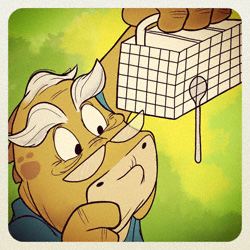 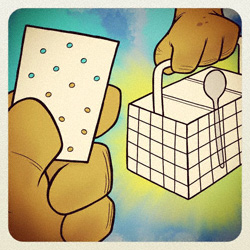 My Sweetheart always puts the cutlery into our dishwasher with the business end up because she says that they get cleaner than if you put them in the other way. Our cutlery basket in our dishwasher has holes large enough for the ends of our small teaspoons to fall through. I took a plastic milk jug, cut a square that would fit into one of the compartments, and then drilled multiple small holes into the piece of plastic, large enough for water to come through, but not for the spoons to fall through. Now we put our teaspoons in that one compartment and never have an issue with them falling through the cracks.