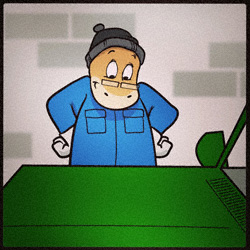 I have noticed lately that the starter is dragging, meaning that when the engine is cold the starter doesn't sound like it is turning the engine over fast as it should so I am going to have a look at the battery and charging system. 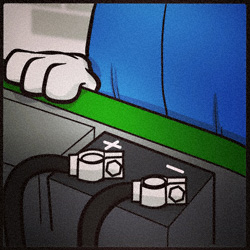 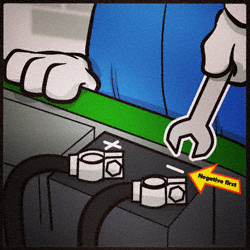 First thing is to have a look at the battery, see if the posts are tight and clean. It is best to remove the battery connecters from the posts on the battery. Some batteries have top posts and some are side posts, mine are top posts but it doesn't really matter because battery maintenance is the same for either type. 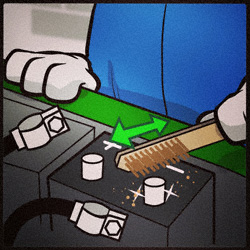 To remove top post connecters you will need a proper sized wrench (or as the English say Spanner,) to loosen the cinch bolt and a flat blade screw driver. First thing is to loosen the cinch bolts on the negative terminal connecter, then gently pry the connecter off of the battery post. Always do the negative one first because that way you can't have a problem with the positive side. 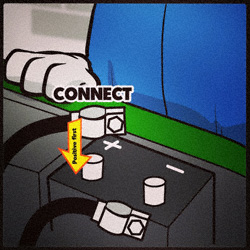 Okay, so now we have the battery connecters disconnected from the battery, and nothing catastrophic has happened... great! Now take a wire brush and carefully clean the contact surfaces of both the connecter and the battery posts. You can buy a special round wire brush for getting into the center hole of the connecter or you can use sand paper but make sure you get all the corrosion off of both surfaces.

Next you can reconnect the battery. Do the positive side first this time for the same reasons as before.

Now that you know your connections are clean and good we can do a little testing. I have a digital volt meter that I use for checking the DC voltage from my battery. With the engine not running test the voltage. It should read above 12.5 volts. If it is under this voltage the battery may be discharged or it may be time to replace it. 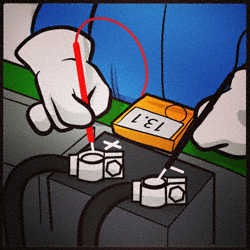 Next test the voltage with the engine running, be careful of the moving parts of the engine especially the fan and belts, you don't want to get anything caught in there! The battery voltage should now read some where between 13.8 and 14.3 volts.

If they didn't test out as they should you might want to put a charger on the battery overnight and repeat the tests the next day.

If the voltage didn't go up with the engine running, then the charging system in the car has failed and unless you really know what you are doing it is time for a qualified mechanic to have a look. 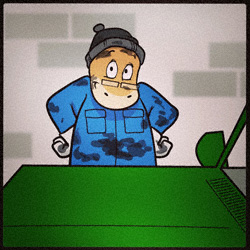 While I was under the hood I also checked the oil level and the air filter, antifreeze level and topped up the windshield washer fluid. I could have also checked the fluid level in the transmission but to do that the transmission must be at operating temperature and since I didn't have any where that I needed to drive the car I decided to leave that one to a later time.