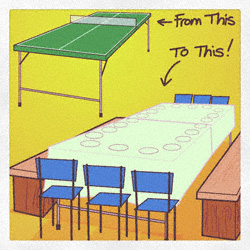 40 years ago when my sister was the only person lucky enough to have a basement with a ping pong table, we held all our Christmas family gatherings at her house. Not only did that keep the kids busy downstairs while the adults were visiting upstairs, but come mealtime, she had a table big enough to put everyone around. We could squeeze 20 of us around that ping pong table sitting on folding card table chairs and benches made from wooden crates with planks strung between them.

All she did was throw a couple of big white flat sheets over the ping pong table, and we had elegance to spare! There was plenty of room in the middle to put the food and everything could be reached from one side of the table or the other.

When we moved to this house and it had a basement, I knew that what I wanted most was a ping pong table. Mac wasn’t apposed, but he reminded me that not only was the pingpong table not really sturdy enough to take the abuse of ongoing family dinners, but the framework of the pingpong table didn’t make it the most comfortable thing to sit around either, especially if you were stuck at one of the legs. 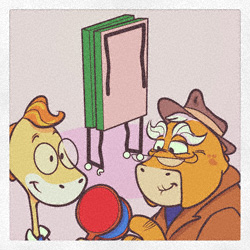 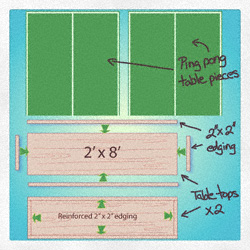 As always, he did have an idea though and in the end, not only I did get my ping pong table / dining table, but I also got some extra versatility. First of all, he acquired a second-hand ping pong table for free because the legs on the frame were bent and one of the wheels were broken. The owner was happy to get rid of the the broken table and even gave Mac several sets of paddles, a net and ping pong balls!

Mac took the bent and broken framework off the ping pong table top so what he had left was two pieces of just the table top. Each piece was 5’ X 4.5’. 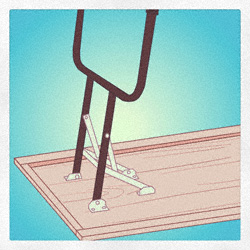 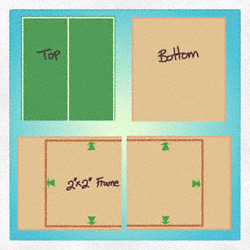 The next thing that Mac did was take a 1/2” piece of plywood cut in half lengthwise so that he ended up with two 2’ X 8’ pieces of plywood. He reinforced each piece of plywood by screwing a  2 x 2” edging all around to the underside of each cut sheet of plywood. Then he attached a pair of those folding table legs to each table top. Now we had 2 tables (8’ X 2’) that by themselves can be used for a variety of things. They can go outside in the summer to use as buffet tables, or I can set them up as narrow eating tables. I’ve even used them as garage sale tables. 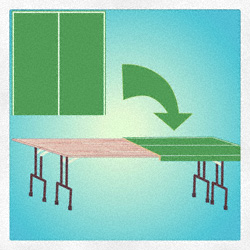 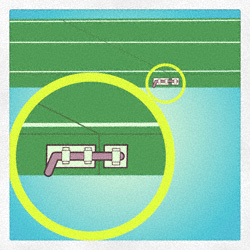 When I want the ping pong table set up, either for the kids to play with or if we’re going to use it for big family dinners, we just set up the two portable tables side by side. What Mac did was attach another 2x2 framing to the underside of the ping pong table, measured out exactly to fit over the two tables when they are set up beside each other. Then at the centre halfway point on either side, he put in a bolt latch. When we lay the ping pong table top on top of the side by side tables, the 2 x 2 framework locks them in around the two tables so they don’t slide around. Then when he does up the bolt latch on either side of the two halves, the whole table is as sturdy as can be and the legs of the tables are far enough in that they don’t interfere with the legs of the diners.

When we need the room for something else, the ping pong table top comes apart in its two halves and the two tables underneath can also fold up, so they take up very little space against a wall.

I’m happy because I have the versatility of setting up the ping pong table in the basement for our family gatherings in the winter, or out on the lawn in the summer. I also have the option of using the two fold up tables for other things the whole year round!