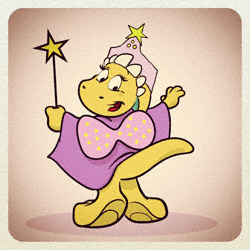 BooBear has been going through a fairytale stage lately and I thought of an easy present to make for her that she will really like. It’s a princess canopy for her bed. I talked to Grampa about my idea, and he said he would be happy to help me out. We waited until she did an overnight sleepover at one of her friends to surprise her.

I got the idea when I was cleaning out the linen closet for my Mom. She had two double-size flat sheets with nice blue flowers on them with no fitted sheets to go with them. Mom knows how to make a fitted sheet out of a flat sheet, but she’s already got several double sheet sets. We only use double size sheets on the hideabeds, so when I asked her if I could use them, I knew she wouldn’t miss having them. 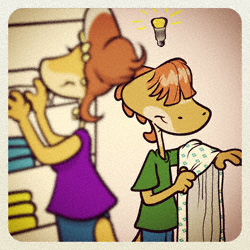 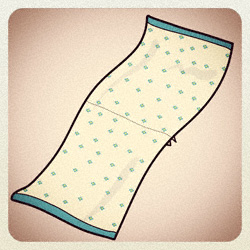 First of all, I needed some kind of rod that would hang from the ceiling lengthwise about in the middle of where her bed is. Grampa had some doweling that he said would work, or we could just reuse an old pocket rod that he already had. We decided on the the pocket rod because it could be extended really long, but I only needed it to be about three feet long, so we could push it together to make it the smallest size. That made it pretty strong. We hung it upside down on the ceiling by its hardware. 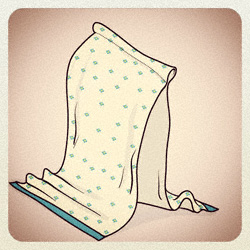 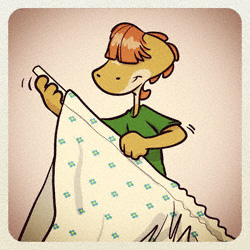 Next, I sewed the two bottom edges of the sheets together with the pattern on the outside so that it made one long piece of cloth. The original top edges of the sheet with the large hem were at the bottoms of each side and looked like a finished border because they were in a solid blue colour.

After I sewed the bottom edges together, I folded the sheets together  at the seam (with the pattern on the outside) and made a second seam about two inches down so there was now a pocket in the middle of my long piece. 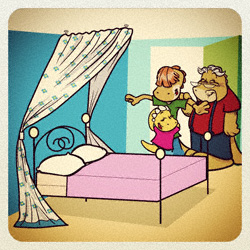 I threaded the curtain rod through the pocket I had made in middle of the two sheets and hung it back on its hardware on the ceiling. Because the sheets are wider than the curtain rod, they are nice and ruffled looking instead of just straight pieces of material. Then Grampa screwed two coat rack hooks sideways facing away from the bed on each side of her bed. We draped each side of the sheets over the coat hooks so that it makes a nice swept back look for the curtains. That way she can still get in and out of bed without them being in the way, but it still looks princess-like!