My Grampa told me that pretty soon they will stop making pennies. Maybe by the time I grow up, there won’t be any more pennies at all! I decided that I want to start saving pennies before they are all gone.

Grampa knows how to make a piggy bank from a milk jug. He helped me make one to save pennies in.

This is what you need to make a milk jug piggy bank like mine. 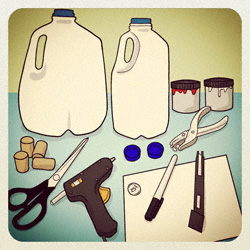 The first thing we did was wash out the milk jugs with hot water and soap to make sure we got all the milk out.

Grampa used the craft knife to cut a coin slot just below the handle of the 4 litre jug. He said when I wasn’t old enough to use a craft knife yet. 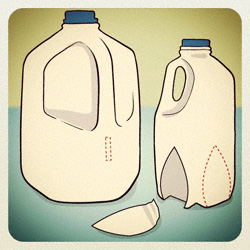 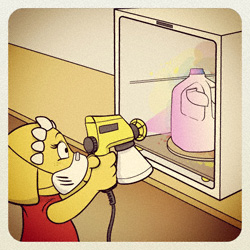 Then we took the 2 litre jug.  Grampa drew ears by using a corner so that there would be a flap to glue to the big milk jug. I cut the ears out with scissors. Grampa glued them on to either side of the handle with the hot glue gun. I’m still too little to use the hot glue gun too.

After that, we put the milk jug into his paint spray booth and grampa mixed up some pink paint. He mixed red and white together. He let me spray paint the milk jug all over. Then we let it dry. 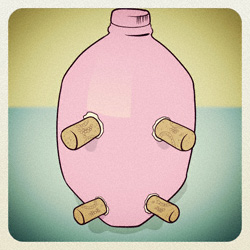 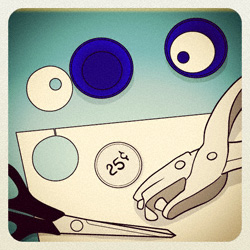 After the paint was dry, Grampa glued on the corks to the bottom of the milk jug for his legs with the hot glue gun.

We used a quarter to make round circles on some white cardboard. I cut them out. Then  I used the hole punch to make a hole on one side of the circle. I made two of them.

I pushed the white cardboard into the bottom of the bottle cap so that the hole looks like a pupil of the eye. 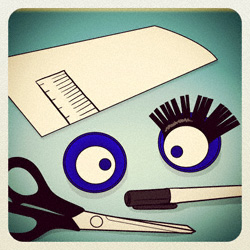 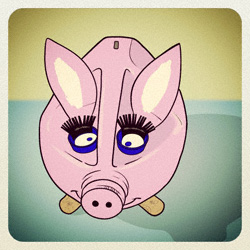 We made eye lashes by using another corner of the 2 litre milk jug and cut 2 pieces out about 3 cm long by 1 1/4 cm wide. Grampa drew lines for me to cut with the scissors to make the eyelashes.  I also cut the bottom so that the eyelashes would curl on the inside of the bottle cap.

After I cut out the eyelashes, I coloured them black with the sharpie. Grampa glued them to the inside of the bottle cap with the bend facing down. That way the eyelashes curl back. Then he glued the eyes to the milk jug.

After that, all I had to do was draw 2 dots on the lid for the nose, and a big smile under the nose. That was easy because my milk jug had a circle bent into the plastic so I just had to follow it