Ever since we learned about the electricity vampires in our house, my older sister has been running around behind everyone unplugging EVERYTHING as soon as we were done using it.  I think Dad got tired of nothing ever working ‘cause he finally went out and bought the family a smart strip. Since I am the family “pro” on technology, I decided to write this blog to explain to everyone exactly how it works!

Everyone was surprised when we found out that lots of our electronics like TV’s and computers use power even though they are turned off.  Experts say that this phantom power consumption in the average home ranges from between 5 and 10 percent of your family’s total energy consumption! (source: Lawrence Berkley Nation Laboratory - see, I WAS listening, Mrs. Ewanachuk!) The only way to stop this power drain is to unplug everything after you are done using it or use technology to help you do it.

There are all kinds of fancy smart strips that you can buy, but they all have at least two things the same:  electrical outlets that you can plug your stuff into and circuitry that controls the power to those outlets.  Whenever a device that is plugged into the smart strip goes into standby mode, the smart strip senses it and cuts the power off completely to that plug. Many of these smart strips also have one or two plug-ins that never go off for plugging in things that always need power like your cordless phone or a baby monitor. 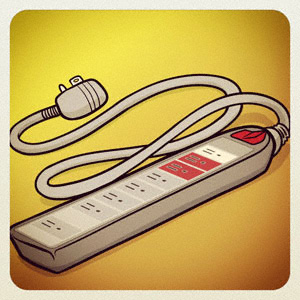 The one that Dad bought us for our entertainment system is really cool though because it actually has colour-coded outlets that help you organize your devices by how you use them.  On ours we have the TV plugged into a control outlet and all the devices that are only used with the TV (like the DVD player and the game console and the surround sound) get plugged into the smart side of the strip. They automatically all get shut off when we turn the TV off!  Pretty smart, hey?  As soon as you turn the TV back on, the smart strip detects it and turns the power on to all your accessories again!

There are more complicated and expensive smart strips can even do a lot more than just cut the power.  There are some strips with remote controls so you can turn on and off each separate outlet and others that use motion detectors or passive infrared sensors with timers to detect when there is nobody is there. When they sense that no one is in the room, they automatically start the countdown to power off.  If someone walks back into the room, the countdown stops. Most of them have adjustable timers anywhere from 30 seconds to 30 minutes so you can set it for whatever works best for your family.

I was excited when we got our Smart Strip because we can save a lot of electricity and all without having to run around pulling plugs or flipping switches on the regular power strips.

Mom is now asking for Dad to install some under the kitchen cabinets so she doesn’t have to keep unplugging all her small appliances on the counter. That would make both her AND my sister happy.