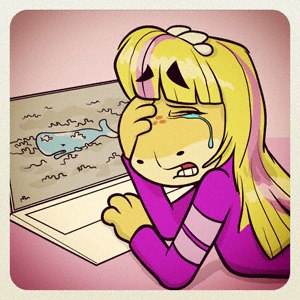 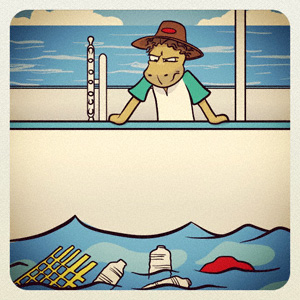 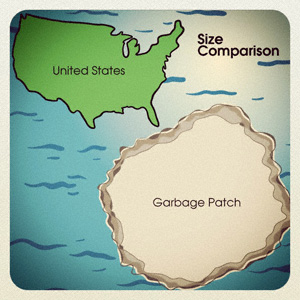 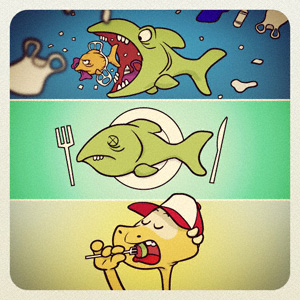 I was just surfing around on the web on my favourite subject, whales when I came across a really shocking PSA (Public Service Announcement) about a whale swimming around in a sea of plastic!

It was so sad that I got really upset and cried when I saw the poor whale burst through the surface trying to get away from the garbage!   It’s a powerful clip that makes you think about what it would be like for all those marine animals when our oceans finally do become clogged full of plastic!  After I calmed down a little I started to do some research on just how much garbage we already do have floating in our planets great bodies of water.  I must say I was quite disturbed and very alarmed to hear that we have not one, but two zones in the Northern Pacific Ocean that together make the Great Pacific Garbage Patch!!!

The story goes that Mr. Moore who was a sailor came across the patch by accident while he was taking a shortcut home to Los Angeles after a yacht race.  He steered his ship into the “North Pacific gyre” which is a windless vortex with many high pressure systems that sailors usually avoid.  In an interview about the trip Mr. Moore said: “Every time I came on deck, there was trash floating by.  How could we have fouled such a huge area?  How could this go on for a week?”  Mr Moore was heir to an oil fortune but his experience was so life changing that he sold all of his business interests and became an environmental activist just like me!

Apparently this “plastic soup” is growing very quickly and is currently twice the size of the continental United States! I don’t know how that makes you feel but it just makes me sick to my stomach.  Also scientists also say there is at least 100 million tons of plastic out there that is all ground up into tiny little pieces that may as much as double in size over the next 10 years.  The biggest problem with all that plastic is that all that it gets eaten by sea mammals who mistake it for food.  I’m so worried about the gray whales who are filter feeders looking for algae sucking up all those plastic pellets and remember those 7 sperm whales who beached themselves 2 and a half years ago in Italy that all died from eating plastic bags in the ocean that they mistook for squid.  I was so furious about that!

I always say to people who don’t care about the ocean that: “if you won’t do it for the marine mammals then do it for yourself”.  After all, fish eat it plastic too and then bigger fish eat him and with all that plastic out there, some of it may end up on our dinner plates!