Last week the kids came to me for ideas as to what to do for my sweetheart for mothers day. They had come up with the usual ideas of flowers or greeting cards, even boxes of chocolates were suggested. Now I know that anything coming from the kids or grandkids would send her to the moon but some of those things were sort of same old same old, know what I mean? 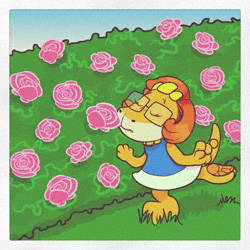 This year I suggested that we all work together on something special, and we can even include their cousins. I think she is going to love this.

When my sweetheart was a girl, they lived in a small town about an hour north of here. Her mother had brought a piece of a rose bush with her when she immigrated from England, which was from a rosebush planted by my Sweetheart's grandmother. It is called a hedge rose. My Sweetheart has always talked about how lovely her "Grandmother's Rose" was  for its big full hot pink flowers and for the sweet, rose perfume that they put out. Unfortunately, when the family moved, they forgot to take a piece of it with them, but my Sweetheart has always fondly remembered her grandmother's rosebush. 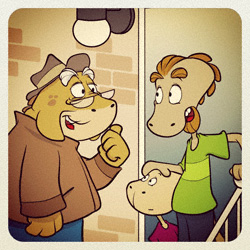 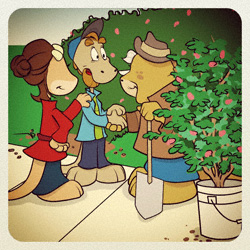 Last week, I took a drive up to the old homestead, and there was that rosebush, big and thick and beautiful, just starting to bud out its leaves. Because it's a hedge rose, they grow like crazy and will take over a yard in no time. This one had certainly done that. I knocked at the door and talked to the owners and told them the story of the Grandmother's rose and asked if I could take a piece of it back home to my Sweetheart. They were more than happy to let me dig out a big chunk off one side that was invading their sidewalk.  I put that chunk of rose in a 5 gallon pail, and drove home with the branches sticking out the window, and hid it behind my garage. 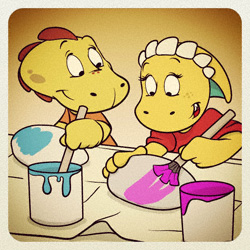 I told the grandkids what my idea was, and they were thrilled. We went down to the river last Saturday and found some big smooth river rocks. We snuck the stones into my shop where everyone got to paint their rock and paint their name and special message or decoration on it. Each rock was painted  differently with most of them having several colours. Of course Boo Bear's was pink. Go figure! It was a good way to use up some of the partial cans of paint I had and we all had fun doing it.

We're going to plant the rose in the garden this weekend and place the grandkid's rocks around it in a circle. On Mother's day she will find her "Grandmother's Rose" in the garden and know how much her grandkids all love and appreciate her!