Today has been a very rainy day! So rainy that my neighbor Lenny called me for help because had water coming into his basement. Just one look at his eavestroughs, and I could see that they had pulled away from the house, which was allowing the water to run off the roof and down the side of his house.

During a break in the torrential downfall, I got my ladder down and went to have a look. Sure enough his eavestrough was full of dirt and had got so heavy that it had pulled the hanger nails right out of the ends of the roof trusses. This is not good because it means that more of a fix than just hammering the hanger nails back in was necessary. The ends of the trusses had gotten soft from many years of holding up the eaves and maybe a little dry rot as well. 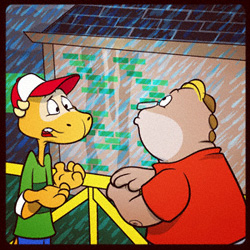 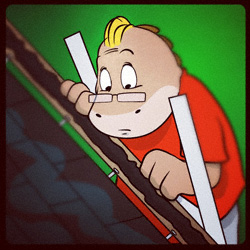 It was necessary to make new places to hang the eaves from. What we did was to find the angle that the old trusses were cut at on the end that comes to the bottom. Then we cut that angle on some short pieces of 2x4s. Up the ladder with a clamp and screw gun to screw the new pieces to the old trusses. It gave us a new place to put in the hanger nails so that the eaves would catch the rain water and drain it somewhere other than right beside the Lenny’s house and into his basement. 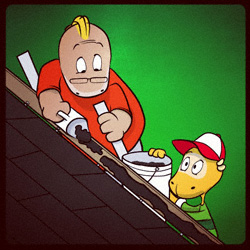 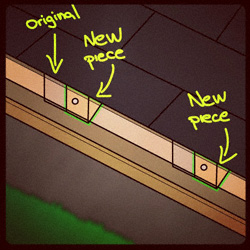 While I was helping him fix this problem I noticed how well composted the dirt was that we had to clean out of his eaves. He told me he hadn't cleaned them from the year before and that all last year’s leaves had been composting up there. I filled a 5 gallon pail of very nice compost that I can add to our flower pots. I don't recommend making compost this way but since it was there, why waste it? 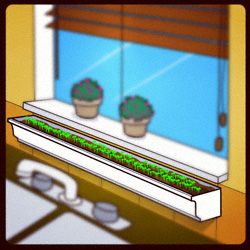 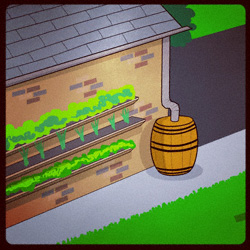 All this eaves repair and compost gathering gave me a great idea. My Queen was after me to make her a box that she can plant an indoor herb garden in to go in the window over the sink. I think I will make them out of some extra plastic eavestrough I have. All that I need to do is cut the trough to the length of the kitchen window, add an end cap to both ends, and I can even hang it with regular eaves hangers. Almost instant herb box that will look good and last forever.

I know Dad uses old eavestroughing to start his flowering plants outside in the greenhouse, but I wonder if he ever thought about hanging them up as actual planter boxes? He’s got a sunny side of the garage that’s out of the way. They could be just the thing to plant a couple of rows of lettuce, onions and radishes in for a salad garden!