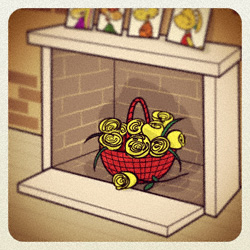 Our house has one of those old gas fireplaces in the living room that was disconnected years ago because it wasn’t safe to use. I’ve always liked the idea of a fireplace and even would have liked to have a real wood-burning one. However, fireplaces, especially older ones are rarely efficient and are often a good source of drafts in the house.

Because all the workings were removed when the gas was disconnected, we just have a brick box left with a small hearth and a mantle. The fireplace has brick around the sides as well. Usually, in the summer time, my Sweetheart has a bouquet of dried flowers in a basket that she just sets inside the firebox. It looks nice. 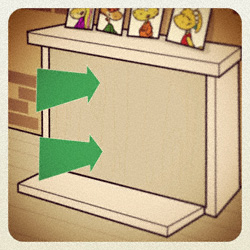 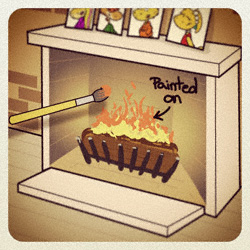 Even our gas fireplace has a draft that comes down when the weather is cool, so a few years ago, I made wooden force-fit door with a slight lip so the edges of the door slips into the opening, but the lip overhangs the edges of the fireplace so the firebox is closed in.

My Sweetheart painted the door to look like a fireplace box with a fire inside. I have to admit, she did a great job. At Christmas time, she puts garland around the mantle and poinsettias on the hearth and it looks real festive.

My Sweetheart has often commented that as nice as the fireplace she painted looks, she misses the light from a real flame.  After I spotted an old fireplace grate in the second-hand store, that got me to thinking that there’s no reason why we couldn’t have a real flame every now and then. 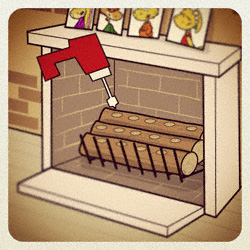 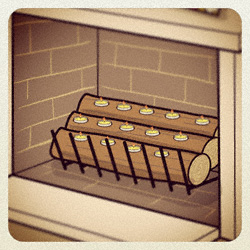 First of all, I got some nice birch logs  and cut them to length to sit in the fireplace grate. I arranged the logs on the grate until I had them piled in nicely going up. Then I took a 1 1/2” spade drill bit and drilled out 1/2” indentations in the tops of the logs that I could slip tea light candles into.

When she was at the grocery store last week, I slipped our fireplace logs in behind her fireplace screen. Tonight, I intend on making us a nice hot apple cider and surprise her by opening up the fireplace and lighting those candles in the logs so we can enjoy the “real” flames!