So I’ve decided that my blog is going to be about different things I can do around the house that can save some money, which is one of my favorite topics. With 4 kids constantly leaving lights blazing in every room even in the day time, I’m looking to find ways to save even more on the old light bill. So here is my new plan: 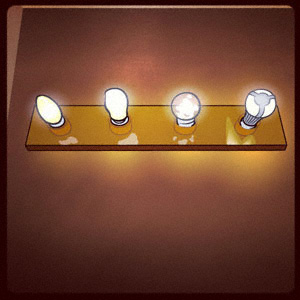 I’ve been using the bathroom for my experiments because it is a room that gets a lot of use and needs to be well illuminated. Its light fixture is a bar with 4 bulbs side by side that used to take 4 clear round incandescent 60 watt bulbs. That is a total of 240 watts just  to light that one room! With this light bar, it is easy to try out different bulbs and compare the light that each gives out to one another.

We originally changed to the CFL lights throughout the house, and in the bathroom that brought it down to 4 bulbs at 23 watts each for a total of 92 watts. That was a big savings! But we weren’t always happy with the amount of light and they can’t be used with a dimmer switch for the rooms that have one. Also, the CFLs have harmful lead in them that must be properly disposed of when the bulbs no longer work so even though they are much more efficient than the old incandescent bulbs they still have some drawbacks.

Now that the LED lights are coming out and coming down in price I have been trying different types. They draw even less power than the CFLs, last longer and have no lead in them, but I still have to see if they will do the job.

The first ones that I tried came from a big box store, they were rated at 1.7 watts each and were supposed to replace a 40 watt incandescent bulb. I’ve tried a couple of different styles, but the family was not happy with them because they didn’t put out enough light and the light had a blue colour to it that made everything look bad, at least in the place where you’re trying to make yourself look good. Surprisingly enough, the light output was noticeably different between different styles of bulbs even though they all had the same wattage. These bulbs will get shifted over to lamps where the colour and brightness isn’t as critical as I find other bulbs to test in the bathroom bar. 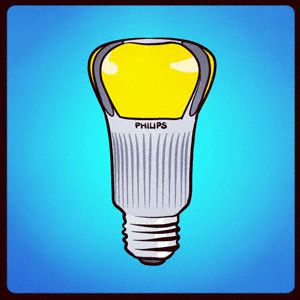 I’ve learned about LEDs being rated for colour and that if I wanted a “white” light I had to look for the right package. Next bulb I tried was rated a little higher wattage, still only 2.3 watts, and I sure made sure it was a warm white light... MUCH better!

The latest one that I am trying is a new kind by that is even brighter and is shaped more like a conventional light bulb and can be even used with a dimmer switch, not that we have one in the bathroom. It is 12.5 watts and pricey at $25 a bulb (originally close to $40 a bulb) but if these work out they should work well in most places in the house. Hopefully they will come down in price even more.