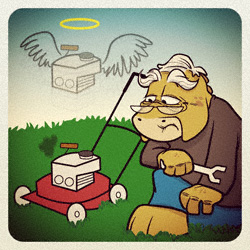 Last summer my old lawn mower gave up the ghost. The engine was way beyond fixing and the cost of a new engine was just about the cost of a whole new mower so I bought a new mower but I still had the old one. See the deck, wheels and handle were still in good shape, I hated the thought of just getting rid of it but to keep it I had to find a good use for it.

My Sweetheart gave me the idea that with some modification It would make a great dolly for our garden seedlings. After all, it has 4 good wheels and a strong handle.

I had to decide how to set it up so as to make planting easier. Seems to me one of the hardest parts of planting is getting up from my knees to go to the greenhouse for the trays of seedlings. If I had some sort of a cart, I would be able to load up a whack of them and take them right to where I was planting. 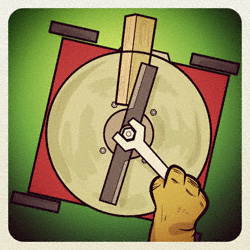 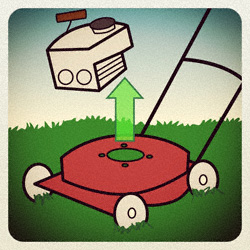 Here is a way that I have used to stop the blade from turning. Take a piece of 2x4 and put it through the grass discharge chute. Then when you turn the bolt, the blade will only turn until it comes up against the wood, and then the bolt will come loose and out. Next I took the 4 bolts that hold the engine on to the deck out and lifted the engine off the base.

It was a good thing that I remembered to drain all the gas and oil out of the engine before I started because I had to turn the mower upside down a number of times to get the blade and engine off. I will take the engine and blade to the metal recyclers next time I am going that way. 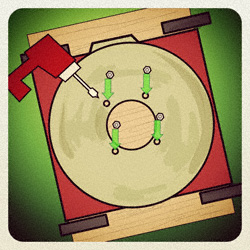 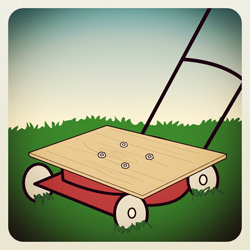 There was a rather large hole in the mower deck where the engine use to sit and the deck is neither big enough or flat enough to be of much use. So I took a piece of plywood that in my case was 18x24 inches to use as a base for my cart.

I turned the mower deck upside down on my plywood, centered it and carefully marked where the holes from the engine mount bolts went on my wood. I then drilled matching holes in the plywood and using the same bolts that held the engine in place bolted down my plywood to the mower deck. Now I had a nice flat surface to work with.

It occurred to me that not all mowers may have a flat surface where the engine was bolted in but I am sure that if that was true a few shims would allow for the plywood to be level when the mower wheels were on level ground. 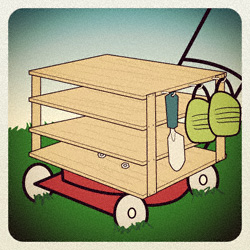 I found that my new deck would hold 3 of the trays that I start my seedlings in but I really wanted to be able to haul more at one time so I made 3 more levels above my mower deck by adding a frame and shelves above my plywood deck. It sort of looks like a long legged table with extra shelves under the table top.

I built this one with 3 levels for my seedling trays so now I can easily wheel 9 trays of seedlings out to the garden. It will be easy to move the "seedling express" along the rows I am planting so I don’t have to get up and down as much. I even added some hooks to the side of the top shelf that I can hang my garden trowel and knee pads from. Keeps everything together and handy.

I can hardly wait for the spring thaw and garden planting time!