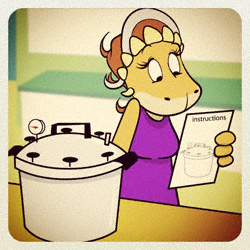 Some times you can get a great idea for something you can use on a date just from listening to your spouse. In my case, I guess I had a little help when someone free-cycled their pressure canner to us and my Queen mentioned that she would love to try some canning this fall.

Well, in order to put up preserves, you have to have some fruit, right? Sure, we could just buy some from the store, but where’s the fun in that? There are all sorts of U-pick farms around and we’ve never once gone, so I decided that this would be an excellent reason to plan an outing to one. Naturally, this date has to be during the day, but who says a date has to be at night anyway? 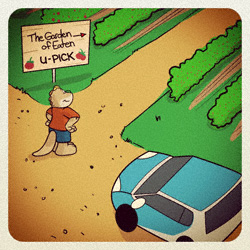 First of all I scoped out the U-pick farms in our area. Most of them are very family-friendly, and some even have playgrounds and picnic areas for the people that come. The thought of just spending the day out in the country was pretty appealing anyway, and I almost considered bringing the kids along because I know they would like the outing as well. But, it’s important for my Queen and I to get to spend time together occasionally without the kids, so for this first foray, I decided that is would be just her and me.

I finally settled on the U-Pick farm “The Garden of Eaten” which is located about an hour from our house because I intended on letting my Queen choose what she wanted to pick, and they had varieties of both berries and tree fruits. 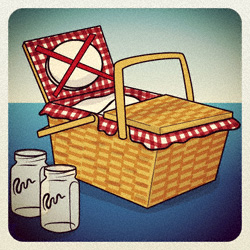 The lady that I talked to said that “sampling while picking” was encouraged, and she suggested that I also bring along a picnic lunch. Well, I’m no stranger to packing up a picnic as you well know, so for our afternoon excursion I decided on egg salad sandwiches with slices of cheddar cheese and pickles on the side and  a jar of lemonade with lots of ice cubes. I have a great old-fashioned looking picnic basket that even has a red gingham lid. I bought it years ago at a farmer’s market and it’s been to many a picnic with the Queen and me.  I threw in some napkins and a table cloth as well as a couple of mason jars to use as glasses for our lemonade. It seemed to set just the right mood for this excursion.

I put some containers in the car to hold the fruits of our labour, and  I also threw in some gardening gloves, a couple of hats and some mosquito repellant. It never hurts to be prepared when you’re going out into the wild! 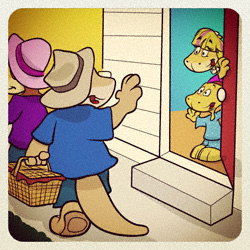 My Queen and I were up bright and early on Saturday morning because we wanted to get to the farm when they opened at 8:30 am. The early bird gets the berries, don’t you know! Not only that, but it’s much nicer to be picking berries before the sun gets overly hot. I wanted to end our date with our picnic lunch somewhere in a nice shady spot.

We headed out with our picking baskets to the raspberry fields and before long we had enough berries picked that my Queen figures she can make jam to last us the whole winter. After we’d picked our quota of raspberries, my Queen insisted that we also pick up some saskatoons as they freeze really well, and are great good in Saturday morning pancakes. Last, we headed over to the orchards to pick some apples. Everything looked and tasted so good, it almost made me wish we lived on a farm. 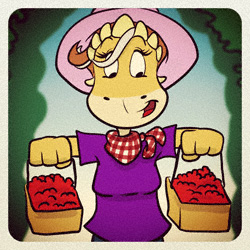 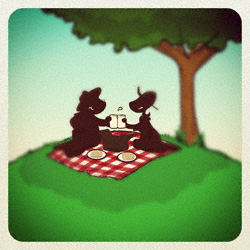 By the time noon rolled around, we were ready to get out of the sun and find a shady spot to have our picnic lunch. My Queen told me that it was one of the nicest mornings she had ever spent and she was anxious to get back home and try out that pressure canner.

It was such a nice outing that I’m thinking that I might have to reserve another Saturday to take the whole family over there and maybe gather up enough fresh fruit to do some serious canning!