The Colours of Autumn

My Dad mentioned the other day that the leaves don’t seem to be changing colour as fast this year as they normally do. It’s funny that so often someone talks about something and a while later you see something about that very thing on the Discovery Channel or something else. Well, on the news they were talking about how our leaves are late in changing because of our unusually warm weather. I learned all about why leaves change in grade school, but it was nice to have a refresher on the process.

Deciduous trees have an interesting cycle. In the spring they sprout out leaves that have the pigment chlorophyll which they need to get food for their roots. Chlorophyll absorbs sun, water and carbon dioxide and converts them into sugars and oxygen. This is how they feed their roots through the summer season when the weather is warm and in the fall they drain the accumulated energy to their roots for the winter. This conversion to energy is called photosynthesis, and since humans and animals also use the energy that plants store in their leaves in their food and of course we all use the oxygen that trees produce, it means that it’s a pretty essential process.

When the cooler weather comes and most importantly, when days start getting shorter so there isn’t as much sunlight as usual, the tree knows it’s time to get ready for winter. The roots drain the chlorophyll from the leaves and that lush green colour changes to yellow or in some species orange and even red. The kind of colours that leaves will turn is in part the result of the underlying pigments that are left behind once the tree’s root have used up all the chlorophyll. Yellow is from carotenoids which protects the trees from some of the side effects of photosynthesis. 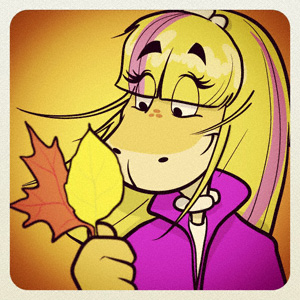 Species of trees that turn orange and red are because as the tree is using up the chlorophyll, it produces other pigments called anthocyanins. The anthocyanins give the leaves some extra protection from UV damage which they are more susceptable to once the weather gets cooler. The anthocyanins allow the tree more time to absorb the nutrients into their roots. It has been discovered that trees that only turn yellow are heartier species that are normally the first trees to naturally populate an area and are not as affected by damage from the sun while they are transferring the food to their roots in the fall. The trees that have leaves that develop the oranges and reds are species that are less hardy and need more protection and time to finish their cycle.

Weather conditions can affect the timing of when leaves turn yellow and start to drop.  Light is an important factor but temperatures can make a big difference as to how quickly a tree will lose its leaves. When the weather stays warmer in the fall, the tree still start on their shutdown, but they take longer to do it and so they are able to get more of the nutrients down to their roots. An early hard frost that kills the leaves before they’ve had a chance to convert their energy is bad for a tree. 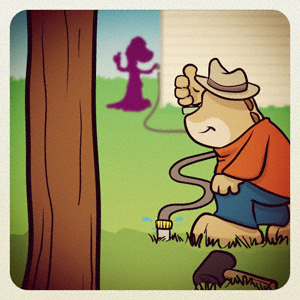 If a tree doesn’t get enough water during the summer season, it may start its shutdown earlier to because it has already started using up some of its resources. Trees that haven’t been able to store enough energy for winter can become weaker. My Dad is very careful about the trees around our house. If it is a long, hot summer, he will water them frequently to make sure they stay healthy. He says that a tree that has enough water is less susceptible to diseases and bug infestations. In the fall, he also makes sure that he gives all the trees a really long drink. He calls it “watering them in for the winter.” Some years other people have lost their trees during a hard winter, but  we’ve never lost any of ours, so I think it’s because my Dad is taking such good care of them.

We’ve really enjoyed the warmer temperatures this year, and it looks like our trees have also. I just hope that we will have enough time for all the leaves to drop before the snow gets here now!