I wrote this report for my social class and Mom said it would make a good blog entry too, so here it is!

A couple of weeks ago in Vancouver, the annual meeting of the American Association for the Advancement of Science made headlines when they called for a “Declaration of Rights for Cetaceans”. This declaration was originally agreed upon last May in Helsinki. 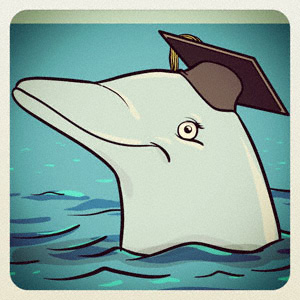 The AAAS  believes that because of the advanced intelligence of whales and dolphins, they should be entitled a designation of non-human persons with rights to life and freedom. The experts say that after years of research, they have discovered that dolphins and whales have self-awareness (can recognize themselves in a mirror), much the same as humans because of their larger brains.

They have shown examples of how Cetacean brains can support abstract reasoning such as one dolphin demonstrated by figuring out how to get more fish as a reward for cleaning up her tank by hiding the garbage and bringing it up one piece at a time. Also, complex social structures have been noted, vocal communications as well as problem-solving abilities. For example, in Australia, the Indo-Pacific bottlenose dolphins teach their children to use sponges to wrap around their noses when searching for food to protect them from cuts from the rocks and coral. There have been other examples where dolphins have fed other and looked after other sick members or helped stranded beached whales get back to sea. There have even been instances when human swimmers have been protected from sharks.

The Cetacean Bill of Rights agreed upon May 22, 210, Helsinki, Finland.

You can join the campaign to call for Cetacean’s Rights to be globally and officially declared by adding your name at this website: