Bubble Curtains To Cut down Noise

As you know, I have a special place in my heart for whales, so I pay attention to anything in the news about them. Recently, I read that there is a  concern among scientists that the noise that we inject into the oceans with ships, bridge building, drilling etc. may be seriously bothering sea life and especially whales.

The problem is that they use their own sound pulses to communicate with other members of their groups about feeding, mating, danger, etc. Man-made noise interferes with their communications, sending out sound waves that confuse or drown out their natural signals to one another. There is speculation that man-made noise may even be responsible for high stress, or pain in marine animals possibly even causing disorientation that may contribute to the high and unexplained number of beachings. 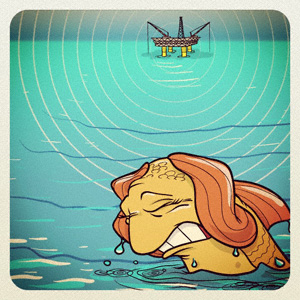 In underwater construction, pile driving causes pressure waves that can even kill nearby fish. Because sound waves travel differently in water than they do in air, they are also much louder and the sound carries much further. This is particularly a concern in places where oil exploration and drilling is taking place, because the processes send out continuous noise that can completely disrupt the habitat surrounding the operation.

Research is being done to test the effects of how “bubble curtains” can be used to lessen the impact of man-made noise on ocean life and marine mammals. Wind energy companies and offshore drilling is particularly interested in this technology due to noise limits that some governments have started to set in response to the growing evidence of harm. 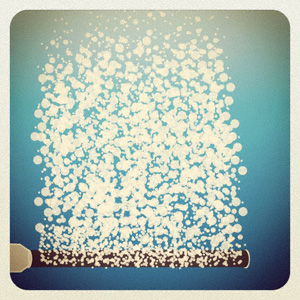 The way a bubble curtain works is that it acts like a shock absorber. The sound hits it, depresses the bubble and when the bubble expands again, the energy loses its momentum. The technology was tested in 2003 by the California Department of Transportation when they were repairing the San Franciso-Oakland Bay Bridge. They needed to drive huge pilings 8’ in diameter and 300’ long into the ocean floor. This was accomplished by hitting them with gigantic hammers to drive them in. The result of the pressure waves killed fish all around the construction area. The cause of death was that their swim bladders had burst and they had massive kidney damage from the pressure wave.

To continue with the bridge retrofit, they used bubble curtains placed directly against each piling as it was being hammered into place. The results were much fewer fish were harmfully affected in the area.

In the North Sea, a wind farm is being built by a group of German power companies. They will be using bubble curtains while constructing the turbines which are 450’ high and weigh 1,000 tons each. They expect that the curtains will keep the noise of the construction to within the mandatory 160 decibel limit imposed by the German Government measured at half a mile from the source of the noise.

It is obvious that if we are going to invade marine life’s territory, we need to be aware of the harm we may be doing to the inhabitants. Bubble curtains are just a start in looking for solutions to a very serious issue.