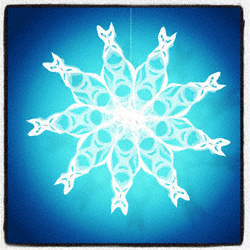 A couple of weeks ago I wrote about a way to turn 12 plastic six pack can holders into a beautiful snowflake instead of having strangulators in the garbage that fish, birds and animals can get stuck in.

Someone was kind enough to email me instructions on how to make a yet a different kind of snowflake. This one takes a few more stranglulators than the first one I told you about, but the finished snowflake is quite a bit sturdier and hangs really well without any of the points getting floppy. 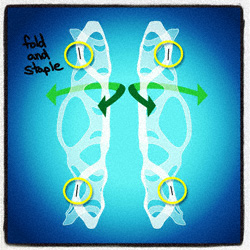 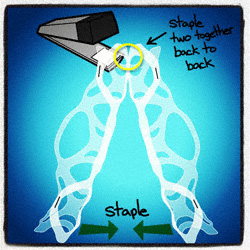 First step is to fold each strangulator in half lengthwise and staple the top and bottom rings together across from the fold.

Now staple 2 strangulators together back to back (folded part to folded part) on the top and the bottom. 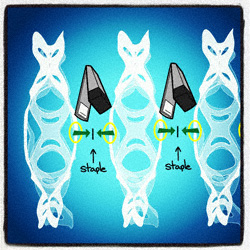 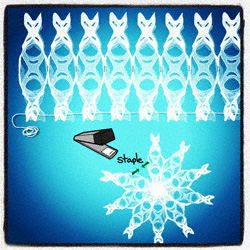 Lay the double strangulators side by side with one facing up and one facing down.

Staple each strangulator to the next one by the middle circles until you have joined all 9 double strangulars together on the top layer.

Flip over and staple each strangulator to the next one by the middle circles until you have joined all 9 double strangulators together on the flipped-over bottom layer.

Run a zip strap or a piece of string through one end of all your strangulators and pull as tight as you can to make a circle.

Staple the final centre rings together on both sides of your snowflake.